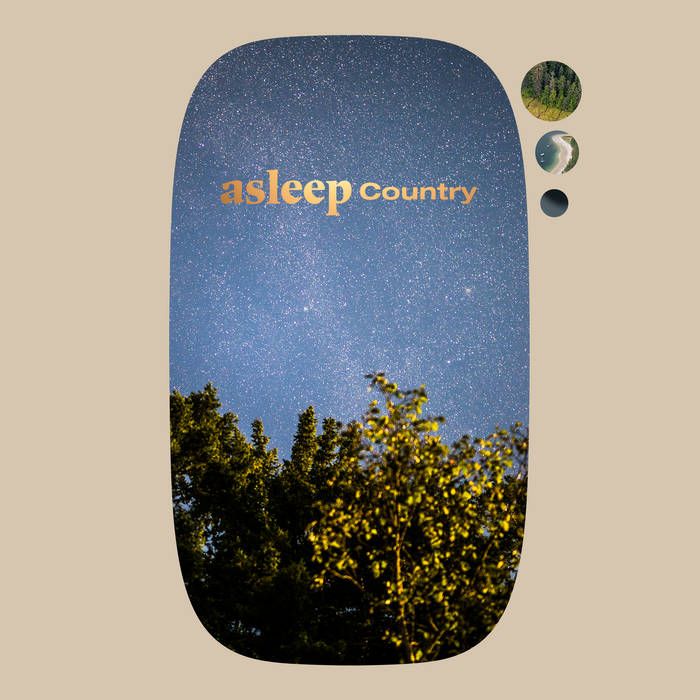 After realizing their major debut project, '100', last year on Next Year's Snow, Asleep Country follows up with an equally ambitious record. Helvetic Sylph not only elevates their original sound through lavishly layered synth, bustling noise, and sprawling collages, but they also continue to flesh out the fantastical world they have created thus far.

Displaying a total mastery of their style, Asleep Country weaves often contrasting samples together, playing into the dissonant and unbound nature of their work. A tumultuous and unpredictable blend of genres from progressive electronic and industrial, to glitch and ambient. Helvetic Sylph serves to be a new beginning for the prolific producer, a culmination of all the styles they have been building on for the past several years, while still seeking to push completely new boundaries.

Upon waking in God's daylight, sightseeing was in question. Nobody quite defined 'sight' in this case, so 'Urban Light' did the job. The sight: a floral arrangement of hundreds if not millions (no telling when it's so much) restored street lamps, illuminating - no, more eating - the shadows of extrinct elder statesmen ingesting radiation for all of its benefits, and the tomfoolery attributed to the nebulous wolfpacked youth of the Great Depression to Glamour transition. During her XXXX visit in the Now Age, she Periscoped the experience to a large airbase of strangers watching nothing in particular, tapping in and out. Ghostly numbers for angelic contrast. Sylphic, ephemeral and non-representative. An experience stolen by lazily privy eyes. America's Funniest Museum Visitation Home Videos for the overworked, sleep deprived, overambitious and exaltedly arrogant of Earth. It was only for a moment that this brightness was simulated. The broadcasts later went offline in an account deactivation or other such circumstances. You don't need to talk about gone things to start it always, do you? Sheesh.

The tour guide made no allowance to cross Matterhorn when the base of the mountain was preparing to get in check by a pawn in a dirt habitat. The Mountain waits for a fool to finally get off its pot-planted rug and start leeching onto its torso in a ceremonious act of crossover Alpine climbing and Alpine food/water resource management and loss prevention. Though its hair follicled peaks were lying in wait, it was no Everest. When they found the lone wilful endangerment expeditor (under the charge of Judging Death), all they found was a campfire, plastic bottles but not the first thing they came up all the way here for: a fucking corpse. Nobody knows whether it was a bet, a gamble, so just another human spontaneity or an accident. Maybe it was a staging of becoming a spirit. A play nobody saw the ultimate climax of which are only its rudimentary details and menial possessions, sometimes the only thing sufficient for the brain are that one item you liked falling to the ground before you were nearly gunned down. Your death is always somebody else's. A good tragedy is better catharsis.

The events leading to incineration and fire-exposure are unusually tiresome and unoccurring. If you're a baker, your smoke-producing fiery jaw of Hell blastproof long-term nuclear warning system of a blast oven is usually just a thing you make a killing of bread in. Dough gets compressed into edible material through baseballing between the forces of nature and manmade restraint. If you have lived on the fringes of mortality, a priest collecting the black tears of a statue into a vessel for more generations there are unique faces, the Old Monument takes material into its eyes and gurgles it with its eyelids before spilling out the sludge. The Monumental Marble is thousands of years long and requires the same feeed every five years. Every time somebody new witnesses it, they come a stranger and remain a tailor, a coutier and a devotee like their life grinds to a halt. Imagine the gaudy panic when it made a move onto the open street and planted itself in front of a stammering suburban type park about to get mowed down for more car roads and ate every vehicle in its sight. I wish it did that when I first was here.

An intercontinental garden rose and was quickly, to the surprise of no one, moweed down by Urban-Type construction a la the Second Greatest New American Mall and The Hypo-Manic's Choice All Earth Olive Garden. The screeching of service. Dessicant, grinding and fluorescents. Someday I'll regret having that lawn when the Floods come to roost. The illustrous bounccer-doorman-concierge at the Door of the Olive Garden CEO mansion watches the backdoor for any potential intruders and keeps a semi-automatic revolver at his side, momentarily. The basics of gun safety is that the gun is ALWAYS loaded. A blank could cost you an eye's blanking into THE DARK OF SIGHT. The cranes erect a wall of Always Constrruction surrounding the Capital of the Former Garden Plains. PUSSY MONEY WEED, My reality is sweet, better than your dreams. Time's of no question when you have your head in the microwave and a hand Never on the trigger but, tersely and unceremoniously, itching.

Candle on candle off. The burn of shins in the waiting room. High velocity eyebrows. Electrical signal producers, the Vestige of Automatic Tweening. The movement is decided when you place your scans onto the timeline. We all have put our faces into the photocopier. FAXed Out. Seeking forgetfulness, next thing you ask for is forgiveness. The chandelier drags for another inning of Still-Hang, the favorite game of the Object. Its goal is simple: REMAIN IN PLACE WITHOUT MOVING FOR A LONG TIME. Rust and then need to be oiled, 1st Condition for Oil Torture. If you get gridlock in history, Oil will drag you right back up into entropic flow. On Christmas Eve we all kneel and put our hands above our heads under Santa's Pine as the Oil soaks into the matter we wear and use as Shields from sharpness, Death and Self. Antiquity and Futurity. They probably only used Linear B in the confinement of the palace, so the Palace Languages ate shit out of the Fate Bowl when the palaces crumbled. OI LED. You Are, Too.

Out-Jesused, Out-Divinated. Holier than X, Y and Z. Alpha & Omega riding shotgun in 'City of New Oil Palaces'. No eyes on the road. Throbbing closely into the gas pedal. Narcissus & Echo would make a good buddy cop show. Paul Blart falls in love with himself and is confined in the Mall. I play Dark Side of the Moon to the best of my memory, though I've never heard it, so the only thing I imagine is the volcanic smokestacks of Pompeii where they got that mutt yapping for a song. They cut the mutt on the later issues. Slimy fuckers, dare defy their sole ally? Ridiculous. This is Zeus' first single since we took Fire. A buffed up hog will eat you and your child, come too close, never see the light again. Air smells like the Cold War. Showers in the Embassy. KGB loved The Guardian. Recently they've been deciding the Australian National Bird of the Year. Pick the pelican and be done with it. Never muddle your intentions with creatures of the night (THE OWL) or tyrannical cockatoos. I'm trying to find this one image of George W Bush with words in his speech replaced by logos of corporations, any help?

Their meeting took meeting at the Opera House and produced little of merit. Niceties, pleasantries, all primary colors, incl. but not limited to: a feisty You Know, But... detours and Haven't You Heards? The adult friendship functions in hope of meeting for 15 minutes in the next 3 months and complaining about your divorce and recalling anecdotes about That One Time. Fraternity of Nothings. It's a Super Bowl halftime booking to get a chance to complain on your expense. It's the closest thing to Arena Rock we have, and it's talking shit about things we have no clear memory of. Deep breath in, out. Over and out.

An angel with a wounded, clipped wing took a flavorful fall under the streetlights. In Paris nobody can hear you scream or die. In Hong Kong nobody can hear you hearing them. Peering off the ledges of the hotel balcony. Sleeping dreams of the Before Man waiting to be realized. A documentary on the Bermuda Triangle rambles on, fatigued from the corner CRT. I'm dying to hear a single Note of the whatsit compositions lying in wait of the Pearly Gates. Ferrero Rocher in your Halcyon Days is nothing like a protein smoothie in your Dorian Scale Dark Age. If you have nothing to write home about, has everything you have been through really happened? 'Dark age' is an arbitrary designation for periods with no written records. Delete your text messages. Delete your Facebook account, PERMANENTLY. Many of the same wistful desires: act like God, walk through the dusty streets Christly, swear off graffiti. Lose all your edge and pray for rain in a bathtub on a soreburnt High Noon Eternal. The mansion's lightbulbs take a solemn knee to the ground and wait for instructions. The maid bows anonymously. You've never looked so ugly with the lights off. On your tongue is faint freedom. Time begs for a plunge.

Slow motion. At best 30 frames per second; all your eyes take. Don't ever look down. This is a morgue of stalactites and marines. Your breath is an earthquake in LUFs, gasping up brickwalls. Slip, slide and scream. Terminal euphoria.

On the road to redemption you begin to wonder how much Doom is in for you after your release from The Institute. It's not that your walk is so heavy. You can still lean on the streetlights and the air doesn't feel so deserted yet. It's not in the Sahara in these moonlit chambers. The Versailles Panotpicon. When you reach the parole stage, you begin to sagely consider everyone before you and whether everyone you left behind will see you the same. Anonymous mantras will let you recall the salinity of the feeling. Ethereal fishiness. A condition to suspicion. When is the last time you have ever been seen? You tend to forget what a mirror is like and what the precondition of reflection is like during solitary confinement in Opti-Versaicon. You've been having nightmares, maybe they're the most fun part of the years you've spent here. Were you here on treason, or as a spy? It's 5 in the morning and you finally are led out to waver, a motorcade of guards monitoring anyone else trying to reach escape path. ADX in Florence, Italy. The European Dream's gone Supermax. Helvetic mask. Put Helvetica on everything. Medicine, terror and surnames.

Swampwater. The lily pod. Red light, green light. Row gently. Breeze harkens back to the raincoat. Under citylight you never screamed. Yet here you can wail all banshee-like. Humans will always turn to superstitution and legend for maneuver. Myth for Freud was a way for Psychoanalysis to steer clear of the clear fact that his patients were just traumatized, and not re-enacting scenes of Greek myth. Oedipus and Electra had only happened once, beyond our when-know and how-know. Never cleared the throat like that before. It takes good practice and willpower to scream. Wide angle lens. The Premonitory View. The sublime ubiquity of ignored surroundings and blase everydaying.

A spy submarine peeks out at the civil part, gathers information and years later topples the government in a coup d'etat. And nobody cares, for stranger things have happened. There are no miracles here.